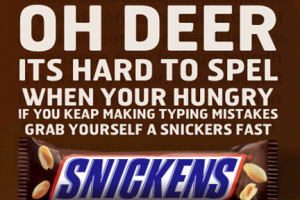 Snickers has had their “You’re Not You When You’re Hungry” campaign for a while now, but recently they have gone above and beyond with this message. They recently teamed up with Google in order to reach hungry office workers with spelling typos.

Snickers used Google Adwords to market to people making common spelling mistakes, as hungry people often do. After someone made a spelling mistake in the search bar, an ad would load saying “Yu cant spel properli wen hungrie Grab yourslef a Snikkers”.

In order to reach the maximum amount of people, they used the 25,000 most common misspelled searches and bid on terms for all of them. Since not many companies bid on misspelled terms, it reduced the cost of their campaign and they reached well over 500,000 people within three days of the campaign launch!

This was a fun and creative way to grab users attention that may in fact be hungry. Even if they were not craving a Snickers bar while at work, they probably were after they clicked on the link. This Google Adwords campaign was successful because it tied in perfectly with their branding, it was innovative, and it received great exposure!