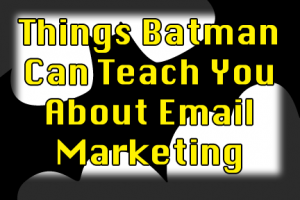 Warning: Reading this may make you want to watch all of the Batman movies.

In just about any movie you watch, there is a life lesson to be learned. Using Batman to teach you more about email marketing may be a bit of a stretch of the imagination, but it will be easier for you to remember! When you face a battle between good and evil, keep these things in mind so that you come out on top.

Don’t Give Up When Times Get Rough

“The night is darkest just before the dawn. And I promise you, the dawn is coming.” – Harvey Dent

Maybe you just had someone unsubscribe, maybe your competitor just re-did their newsletter and it’s amazing, or maybe you see a loss in your links clicked. Whatever it may be, do not let this discourage you! See what you did wrong, and learn from your mistakes. Always think of “how can I make things better” rather than “I just want to give up”. If Batman can scale a wall and crawl out of prison hole, you can survive a few bumps and bruises along the way of your email marketing campaign.

“Well, because he thought it was good sport. Because some men aren’t looking for anything logical, like money.” – Alfred Pennyworth

You have to keep in mind that email marketing is a marathon; not a sprint. It is about building and maintaining relationships with leads, customers, and partners.  So if you don’t see a spike in sales after you send the first email, it’s okay. Just because you will not receive an instant gratification for your efforts does not mean that they won’t pay off in the long run.

Don’t Be Mistaken For Being Part of The Dark Side

“You either die a hero or you live long enough to see yourself become the villain. “– Harvey Dent

Well, let’s hope you don’t become the villain. Make sure you are exercising good email habits, you don’t want to accidentally get marked as spam because of careless mistakes. The most common mistake made is sounding like a spammer; using the word “free” too many times, using ALL CAPS, using more than one exclamation point at a time!! Another thing to stay away from is using just one image without any text. If a spam filter can’t read anything and only recognizes and image, it will assume that it is spam. People can’t read your emails if they never get them.

Keep Your Friends Close, and Your Enemies Closer

“You must become more than just a man in the mind of your opponent.”– Henri Ducard

Well, not exactly. This is more so along the lines of keep an eye on what your competitors are doing. Chances are some of the people you are sending emails to are also receiving emails from your competitors, and you need to stand out from them. However you do it, you definitely need to pay attention to what is going on around you. Sign up for some email lists of places you shop at to get ideas of things to put in your email marketing. It never hurts to have an idea folder to inspire you.

Don’t Go Into Anything Blind; Have A Game Plan

Everything you do should have a plan, because if not you will lose. If you just “wing it” as opposed to creating a plan and seeing it through, you will lose your subscribers. Sit down and determine an email marketing campaign as to what to send whom and when. It will make a world of difference as well as lower your stress levels.